In encountering a neighborhood for the first time, we form impressions about such matters
as the degree of its affluence and its level of maintenance or “tidiness.”

At one end of the spectrum, we might be impressed that an area consists of very large and immaculately maintained homes on spacious lots that are lushly landscaped--even manicured. At the other end, we might observe disheveled shacks on tiny plots with ill-maintained, if any, landscaping.

This spectrum of course consists of the two variables of degree of affluence and level of maintenance. Both are obviously important. But I want to put affluence to the side until the end of this series and to focus on the related but separate variable of maintenance--or, for brevity, upkeep.

I have been curious about how that variable might be both displayed and measured in the Old North (ON) area of Davis.

Measuring Upkeep.
How might one in a reasonably systematic and quantitative manner measure level of upkeep for a given property (and by extenstion a neighborhood)?

My tentative answer to this question has been to formulate a set of categories of levels of upkeep.* These categories are shown in the left-hand column of the chart titled “Aspects of Levels of Upkeep.”

Trying simply to capture distinctions that alert people make in everyday life, there seem to me to be five broad levels, from high to low: Martha Stewart, Ordinary, Eccentric, Scruffy, and Blighted.

We must, of course, specify features of each of these levels that, in composite, provide instructions on how to classify a residential property we have in front of us.

These features are called “aspects” in the “Aspects of Levels of Upkeep” chart. As can be read in the next to top row of the chart, the five categories of aspects deal, in order, with: the physical maintenance of the residence; the decorative stylishness or lack thereof of the residence; the professionalism of the landscape style; sheer landscape maintenance; and, yard debris.

The intersection of the five levels of upkeep and their respective five aspects generate a matrix of 20 points of inspection in total--five for each level of upkeep.

Application.
Applying the scheme is quite simple. One stands in front of a residence and “reads” the constellation of features seen there.

As in all measurement, the extremes are the easiest to see. And, the line between Ordinary and Scruffy is sometimes hard to draw. But, overall, the classification task is not overly difficult. 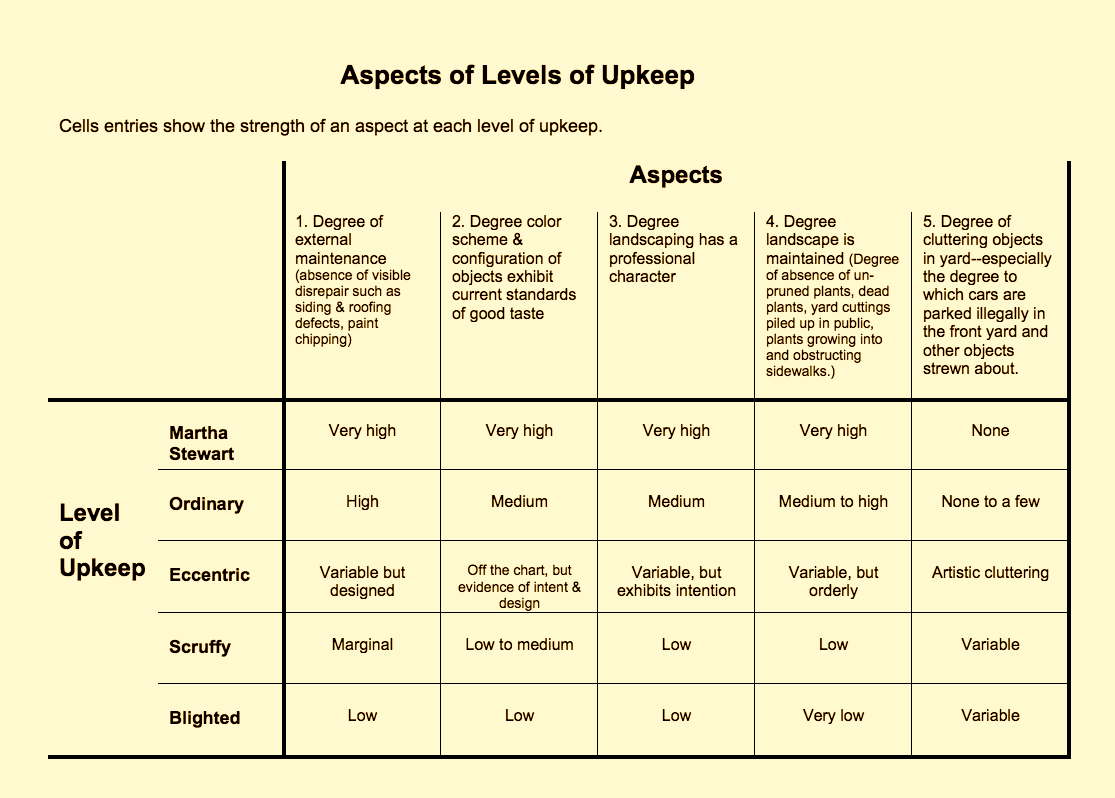 Reliability.
All “coding” schemes raise the question of reliability. Would another “coder” classify residences in the same way? There are two common ways to address this question. One is to have several people independently code the objects and compute the degree to which to their coding agrees. I have done this in a minor way in that I asked my spouse, Lyn, her view of many of the residences and we would discuss and finally agree on a classification. For the greatest number, our independent codings have been the same.

The other method is to publish the raw codes themselves and let readers assess the coding. I prefer to do this, but I cannot because of the quite reasonable personal sensitivities involved.

There is a middle course on this, however. I am happy to provide the details of the codings of all 163 residences to serious inquirers who pledge they will only inspect coding for accuracy and hold in confidence the facts of how individual properties are classified.

Beyond the above, the simple fact in this case is that all those residences are still there and anyone can go out and redo the entire thing for her or himself and see if they get the same results.

Street-Visible Residences.
My initial thought was to code/classify every residence in ON. But I soon found myself entangled in the thorny question of exactly where every last residence might be hidden. A fair number are not obvious.

But then I realized that the point of this endeavor is not to “code” every conceivable living place, but to measure the level of upkeep of a neighborhood. If that is the goal, then every last abode is not the issue. Instead, one is interested in residences that are visible to the street and therefore enter into one’s assessment of the level of neighborhood upkeep.

Using that criterion, I have counted 163 residences that are “street-visible.” By most census and other government efforts to count ON residences, the total is somewhere around 200. Given the years I have walked the alleys of ON, it is not hard for me to believe that on the order to 40 residences are tucked away in odd ways here and there and not “street-visible.”

Results.
So after this rigmarole, what do I find? My first attempt to write the results used the five categories as the first item to report. But that seemed to me too indirect and ambiguous.

So instead, I have decided, as a first matter, to report the results in the sharper form of combining the five levels into only two categories. I call these “positive upkeep” versus “negative upkeep.”

This sharper presentation is shown in Table 1, where we see that 76% of ON residences exhibit positive upkeep as opposed to 24 percent that show negative upkeep. 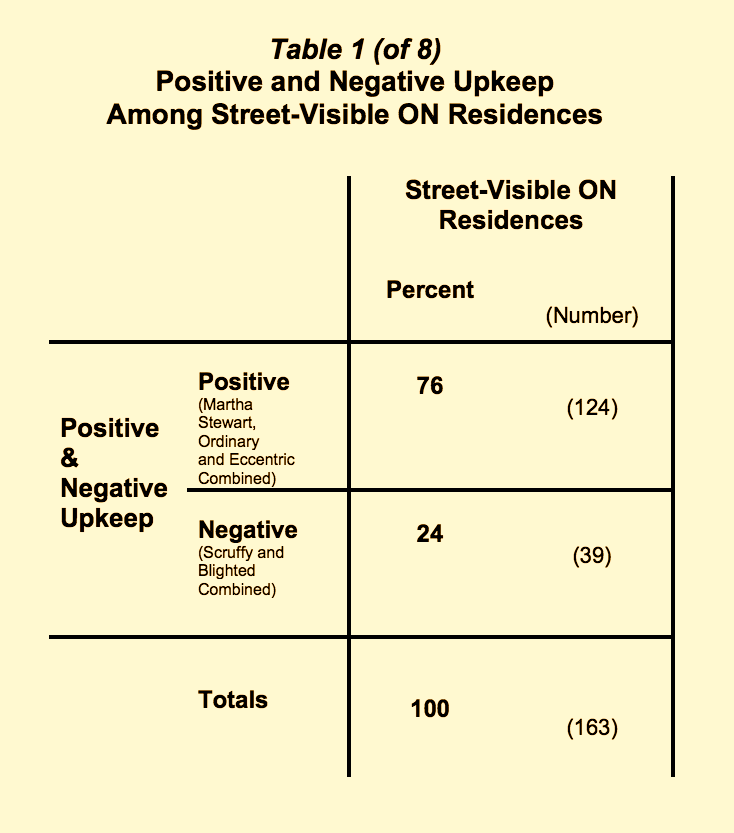 This sharpness opens the way to appreciating the greater nuance then shown in Table 2. 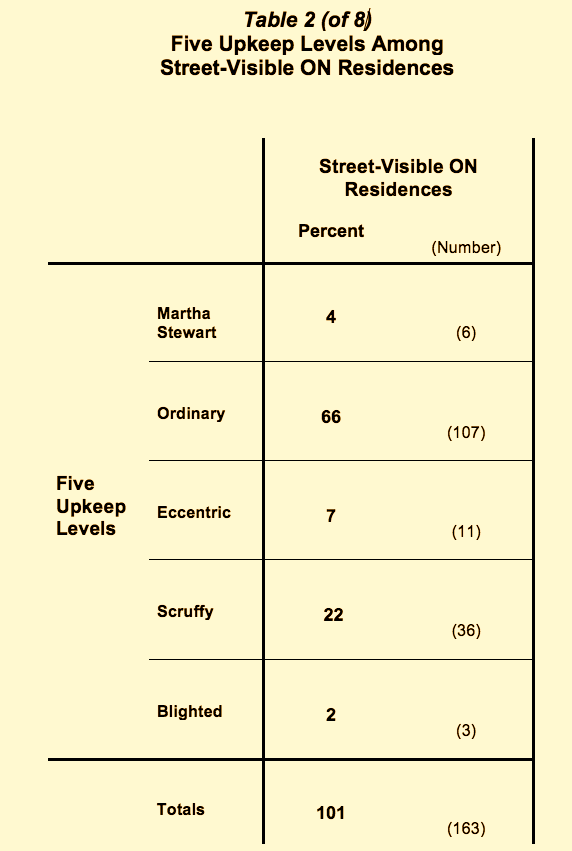 On the positive side, the great bulk of residences are Ordinary (66%, which is 107 residences). These are are flanked by a small number of Martha Stewart places above them (4% or 6 residences) and a slightly greater number of Eccentric residences below them (7% or 11 residences).

The approximately one-quarter of ON residences showing negative levels of upkeep divide into mostly Scruffy places (22% or 36 residences) with a handful of Blighted ones (2% or three places).

So, the purpose of the next four posts is to provide numerical and other contexts for interpreting these results.

______________
* An alternative measurement strategy that I have used in other work focuses on holistic neighborhood features rather than on residence characteristics. This alternative is applied to Davis neighborhoods in a paper titled “lime politics,” which can be read online here: