The letter “N” painted on our streets marking stalls and the “N” placards we purchase in order use them are of course the centerpieces of the Old North Davis Parking District.

Current proposals to change that system pose, for me, three puzzles.

First, under the existing system, after the initial sale period one can buy a second N placard. This would cease under the new system on the grounds that second permit sales cause a “shortage of N-permit spaces” (item 1).

There are two reasons I think this is a false assertion and I am therefore puzzled.

One, I purchased a second permit on April 3rd of this year--seven months into the permit year--and it is only number 94 (item 2).

The official policy is that the City sells as many permits as there are N-stalls.

But there are 174 N stalls. This means that only about half of the available permits (54%) had been sold at the point of entering the eighth month of the current permit year. (See the appendix for a count of the number of N stalls.)

Further, this “under sale” has apparently gone on for years. I have heard from time to time that the City has even threatened to end the N district on the grounds that not enough people participate in it.

Two, it is a matter of common and everyday observation for anyone who bothers to look that most of the time a large number, if not a majority, of the N stalls are empty.

Someone with a cynical turn of mind might suggest that the real reason there is a desire to end the sale of second N permits is to help create a need for residents to buy the expensive new O permit in order to park where they used to park for free. (The aim would be, of course, to generate funds for Old North street changes.)

Second, the official City policy is to provide one N stall on the street for every Old North “address.” There are around 235 Old North addresses (about 200 residences and some 35 organizations) (items 3 and 4 and post number 142, May 6, 2012).*


The puzzle is that there are only 174 N stalls actually painted on the streets.

This shortfall of some 60 stalls is far outside the inevitable “fuzzy boundaries” of human categorization. It is a major discrepancy.

I do not approve or disapprove of this discrepancy. Instead, it is only puzzling because one expects a government, as a matter of course, to adhere to its own published policies.

Let me comment, though, that if the same rule of one-stall/one-address is going to be adhered to in the revised system, some 60 additional N stalls need to be painted on our streets.

Third, proponents of the new system make contradictory claims about the exact, physical locations of the redone N stalls.

On the one hand, the flyer for the May 9th meeting says that “residents [are] to designate preferred location of N-permit spaces.” (The flyer is reproduced in the post before this one.)

On the other hand, much has been made of how the current N spaces are poorly placed and the entire system should be re-striped using professional standards and practices of parking space placement and management (which include additional striping for the new O spaces).

I do not see how you can have it both ways. Is the principle of stall placement to be quirky personal preference or best professional practice?

Speaking only from my experience on my face-block, I do not see why it is necessary to change the existing N stalls at all. I and others I have spoken with on my block find them just fine. As is said, “If it ain’t broke, don’t fix it.”

But, then, experiences on other blocks may be different and require a more interventionist approach. Having recently surveyed N stall placement on all six Old North streets, I must say that the pattern of placement on several blocks seems eccentric, to say the least.

*        *        *
Let me be clear that I support the idea of having a new O permit and creating a fund for the improvement of our streets. But, I am puzzled by a number of ancillary features that have been attached to that effort that seem both unnecessary and contradictory.

_______
APPENDIX
Reproductions of the data sheets on which I marked N stalls for the purpose of counting them. Survey conducted May 4 and 5, 2013. 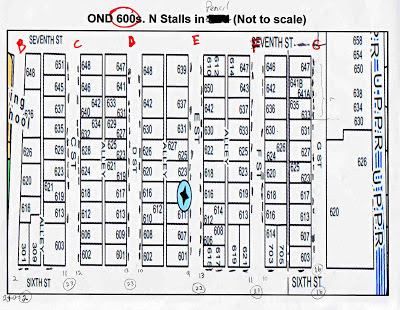 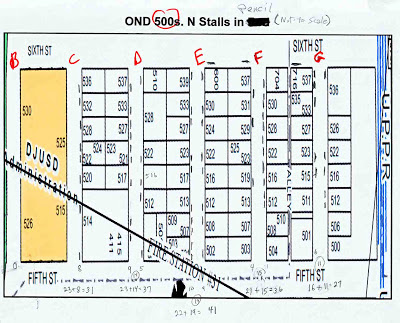