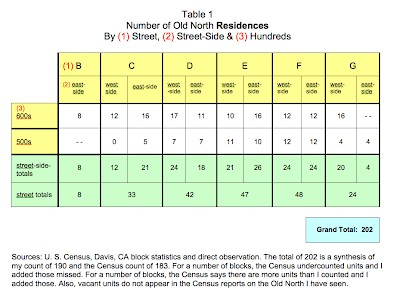 The Nextdoor Company website managed by the ONDNA highlights that company’s declaration that the Old North has 162 households. One implication might be that the number 162 provides a numerical framework for thinking about ONDNA membership.

As everyone knows, the ONDNA is a City-fostered and overseen neighborhood association that, because of its quasi-official status, includes as members, in addition to residents, neighborhood-located organizations and landlords. All Old North people in these three categories are automatically ONDNA voting participants.*


Given this membership inclusiveness, it is of interest to know how many members the ONDNA has. Is it something like the 162 “households” the Nextdoor Company declares or some other number?

Seeking to identify the membership number, I counted buildings “on the ground” and I visited the online block statistics of the 2010 U. S. Census. Here is what I found.

PLACE NUMBERS
1. Residences. Using the terms residence and household as synonyms, I have counted the number of places in which people can live in the Old North. After doing that it occurred to me to look up the 2010 census block statistics. I was happy to discover that the Census and I largely agree, except that I identified some residences the Census did not and the Census identified a number that I did not. Adjusting the counts to accommodate these differences, I arrive at a total of 202 residences. Some details are given in Table 1.

2. Organizations. There are Old North buildings and units within buildings that people use but in which they do not live. These “units” are operated by educational, religious, and business organizations. By my count, there are 35 of these. Their street-distribution is shown in Table 2. 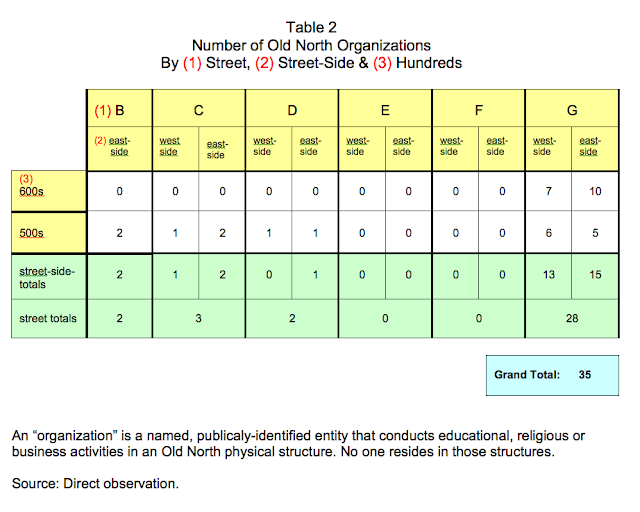 PEOPLE NUMBERS
1. Residents. Counting people is much harder than counting places. I did not even try to do this because the census-takers did it for us in 2010. Table 3 shows those numbers by street and block-hundreds. The total is 413. 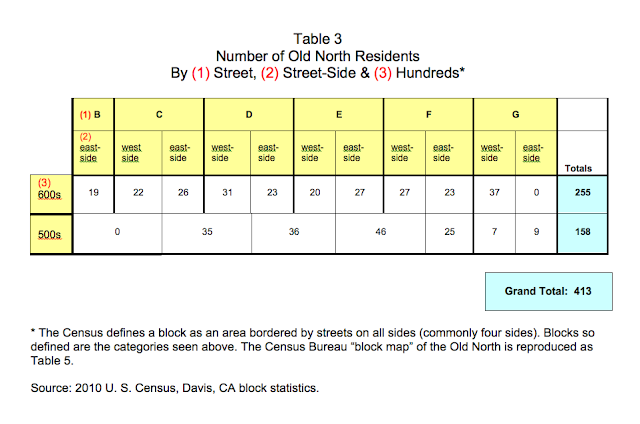 2. Landlords. The Census asked people whether they rented or owned (shown in Table 4), which is, of course, also a count of landlords. About 60% of Old North residences are rentals, which is some 125 units. A number of landlords own several units, so I am guesstimating that the Old North has about 100 landlords (perhaps less if I am underestimating ownership concentration). 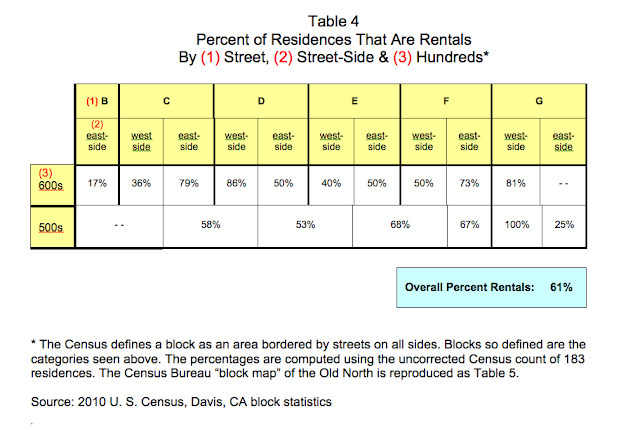 TOTALS
1. Although places are not a category of ONDNA membership, for some reason we count and fret abut them anyway. They add up to over 230 (not 162).

2. The de facto ONDNA membership appears to be about 540 people (assuming there is no age barrier to ONDNA voting membership).

______
*The City reasons that a government-sponsored neighborhood association should be open to all “stakeholders” and without financial barrier. Therefore, the base is expansive and membership is free; dues are voluntary. 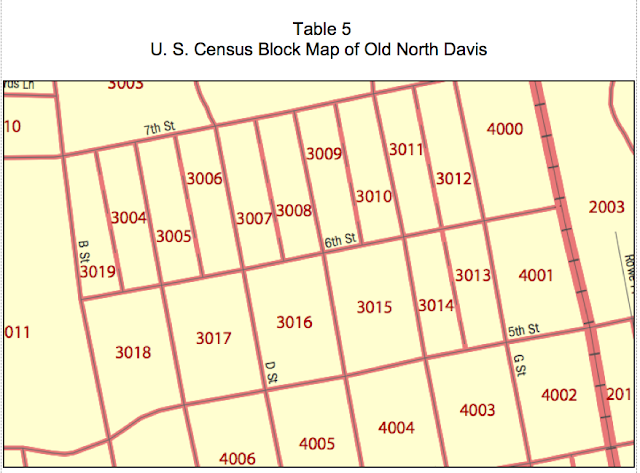