Is Neighbors’ Night Out a Futile, “Feel Good” Exercise? (79)

So we are coming up on the sixth year of Neighbors Night Out parties. These are, of course, those government-sponsored and organized gatherings designed to “keep the peace” between students and longer-term residents in Davis neighborhoods.
I suppose the central question about them is: Do they make any difference? It is difficult to know, of course, since properly done evaluations have not, to my knowledge, been conducted.
Lacking such evaluations, I can only report my own experience in attending these gatherings and the reports of other attendees.  My main observation is that virtually no members of the targeted population--students new to a neighborhood--actually show up.* 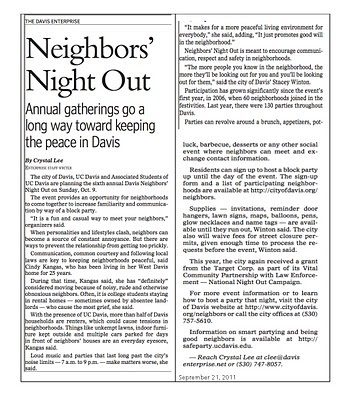 Long-term residents are there, as well as diverse City employees and a good time is had by all. But in the absence of the people who it is all about, what is the point?
There is, though, one aspect of this year’s effort I particularly like: the graphic in the Enterprise titled “Be a Good  Neighbor.” I reproduce it here. I think a copy of it should be presented  to every new student who moves into the Old North--or into any other area of Davis.
All this said, I will nonetheless be attending this year’s Old North Neighbors’ Night Out.
It will be on the expansive, sidewalk-open lawn at 642 D Street, Sunday, October 9, 4-6 pm.  It is a pre-dinner “finger-food -appetizers-to-share” affair in which you also bring your own beverages, plates, and utensils to reuse. There will be coolers, ice, and a hot grill.
____________
* Photographs I took of the 2007 Old North’s Neighbors’ Night Out--the second year-- are posted here:
http://www.oldnorthdavishistory.org/the-old-north-davis-neighborhood-association/year-6-07-08-gerety-presidency-second-year/NineNiteOutPics.pdf/view
I could not find a single student (new or not) in any of the photos. Instead, we see the Old North warhorses and “usual suspects” chatting with one another & Davis fire people & politicos.
Posted by John Lofland at 9/25/2011 07:52:00 AM