The Davis Enterprise has published a very useful account of long-standing neighborhood problems caused by people involved with 1413 Notre Dame Drive in Davis.*
Let me summarize those problems and the actions Notre Dame neighbors took.  Then I will suggest four “lessons” about dealing with “out of control” homes we might draw from this case and other experiences.

Out of Control 1413 Notre Dame  It appears that the renters there caused a “string of problems” “in recent years.” Police were summoned seven times from 2008 to 2010 “mostly to break up loud parties and other noise complaints” Not long ago, “drug task force agents raided,” seized drugs, and arrested a resident. People visiting the house drove cars at high speeds and partygoers “relieved” themselves in neighborhood yards.
Citizen Action and Response. Despite years of troubles, Notre Dame residents only recently got organized to the point of 49 of them signing a petition “demanding solutions” that was sent to the absentee landlord in Burlingame.
That landlord responded by evicting the current residents, fixing up the house, and finding new renters. He acknowledged he had not paid proper attention to this property.
What lessons might we “take away” from this case? I see at least four of them.
One, do not be long-suffering. It is amazing to me that people were so slow to respond and did so only after being galvanized by a drug task force raid.  I believe in what is called the “broken window” theory of neighborhood behavior, which holds that tolerating shabby behavior only encourages more of it and that early and firm response is required for things not to get worse.
Two, do not think only targeting the landlord is sufficient or will work. The Notre Dame neighbors were lucky. The landlord responded. However, he could easily have stonewalled from the distance of Burlingame. And had the neighbors done nothing more, there likely would have been no change.** 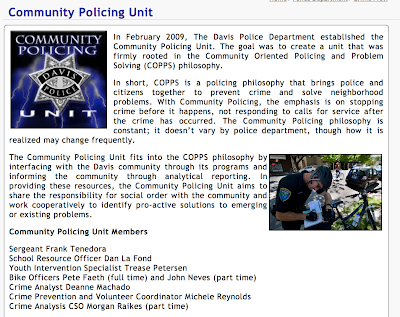 Three, enlist the police. The Enterprise article ends with an account of the Davis Police Department’s Community Policing Unit, “which assigns local beat officers to work with neighbors to address . . . ongoing problems.” Oddly, this unit seems not to have been involved in the 1413 Notre Dame case. I suppose this information is added to the article in order to encourage neighbors in other areas to seek such police action in the future. I had not known there was a Community Policing Unit and I am delighted to learn of its existence.  We Old North residents should be ready to call on it if and when “out of control” houses begin to develop. Here it the unit’s url:
http://cityofdavis.org/police/crimeprev/ 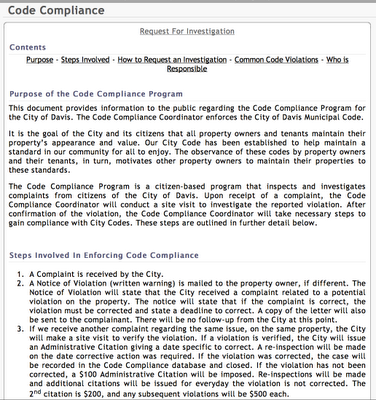 
Here is their url:
http://cityofdavis.org/cdd/forms/code.cfm
Let me comment as a general matter that I am pleased that, over the last decade or so, the City of Davis has begun to take “out of control” residences more seriously in terms of official policy and organization dedicated to dealing with such places.
I can recall a time when City employees--police and civilian alike--turned a blind eye to them. Neighbors were “on their own” in coping with unresponsive, absentee landlords.**
Thankfully, citizen complaints (mine among them) have led to more vigorous and organized City responses (if one asks). JL
_____________________________
*  http://www.davisenterprise.com/local-news/crime-fire-courts/neighbors-take-action-get-results/