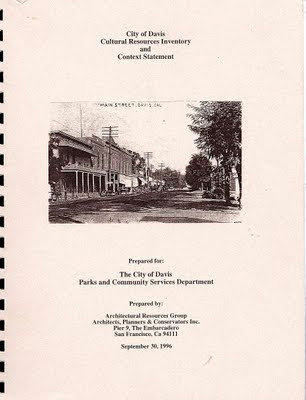 This is the first of two or more posts that seek to understand why there is as yet  no Old North Davis symbol or logo. This post develops background for addressing this and related puzzles.


As far as I can tell, the idea that the land bounded by 5th & 7th and B & the tracks is a coherent area requiring a special name was conceived in the spring of 1996.


Before that spring, several zoning and code formulations seemed bent on developing different portions of that land in varied ways. A summary of these schemes--including some deep partitions--appear in image 1.*
The situation changed in early 1996 when City of Davis historic preservation officials guided a preservation-consulting firm in conducting a survey of historical resources in the town.


For the first time ever--so far as I have been able to discover--that land was (1) conceptualized as a unit that (2) had to have a distinctive name. And, it was given the name “The North Core Historic District.” **


The City of Davis document identifying the area as a “district” appears on pages 273 and 274 in the survey results published on September 30, 1996. I reproduce those pages here as images 2 and 3.***


You can see that the survey consultant and supervisor, Bridget Maley, signed the document. Although she is responsible for the text, I think what she wrote was influenced by intensive conversations with City of Davis historic preservation manager Esther Polito. (I was a citizen volunteer on that survey and observed them interacting in diverse situations over several months.)


My guess is that, as much as anyone else, Esther Polito created what we would later call Old North Davis when she was involved in conjuring up its predecessor, “The North Core Historic District.”


In September of 1996, the label “Old North Davis” did not exist, meaning that no one used it to identify an area in Davis. It’s introduction into the Davis lexicon was, in fact, more than two years away.


A Related Thought: For those inclined to commemorate occasions, September 30th of this year will be the 15th anniversary of the City of Davis officially summoning into existence the idea of an area that would later be called Old North Davis.  Therefore, 9-30-96 is in a significant sense the birthday of Old North Davis.


Another Related Thought: The City of Davis’ creation of the North Core Historic District was not unlike what colonizing empires did when they invented and imposed national borders around territories containing heterogeneous populations. The populations so captured shared little more than the fact that the same foreign regime had been imposed on all of them. While the Old North is a mild instance, the logic of an imposed fiction that people resist (but a few love, of course) seems to me similar.
___________
* Details are given in Davis City Planning, 1925-2005, which is at:
http://www.oldnorthdavishistory.org/1-3-the-grisly-history-planning-zoning-in-the-on

** It was one of three proposed historic districts. The others were the Lincoln Highway and The College Park Historic District--both non-starters, each for its own reasons. In this survey, there was no Old East Davis, University/Rice, or Downtown district. The City of Davis fostered and sponsored their invention and imposed them some years later.