Responding to a Council request, City Staff has produced a 62-page policy analysis of Davis “housing needs and housing types.”*  I read this document from the point of view of its implications for the Old North.
The major implications for our area I see are that previously adopted plans for the massive densification of the Old North are moving right along as uncontested, taken-for-granted wisdom.

Specifically, the 2008 “Map of Sites” and “Table of Site Rankings” featuring color-coded site rankings are affirmed as City policy.

As seen in the two excerpts from the report posted here, the plan shows two major infill projects in the Old North itself and one on its west border. 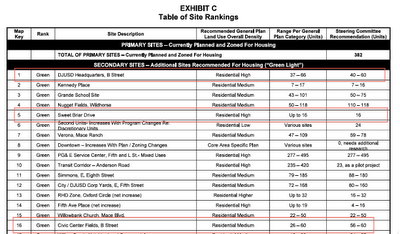 When all three are built, some 80 to 140 residential units will be added in our area and next to it.  Given that the Old North now consists of about 200 units, this will be a very significant increase in our population as well as in our density.
I suppose one question might be: Should Old North people support, oppose, or be neutral about one, two, or all three of these projects? JL
______
*Online at:
http://cityofdavis.org/meetings/councilpackets/20110524/09%20Housing%20Needs%20and%20Housing%20Types.pdf
The above link may still be broken. If so, go to the Council May 24 Agenda Packet list where the report is item 09 (the last one on the list):
http://cityofdavis.org/meetings/packet.cfm?agenda=0A2C2CC3-1143-EEBD-B09D74D99E3074EF
Posted by John Lofland at 5/29/2011 08:23:00 AM