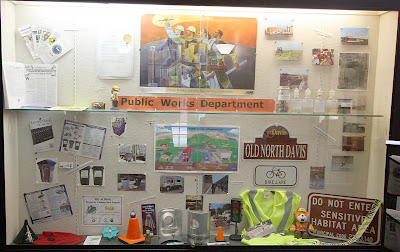 The City Hall main hallway has a display case outside the City Manager’s office that is used to “tell the story” of various groups and projects, including City departments.
At this time, the Public Works Department has a display there that presumably features items the department considers to be important and distinctive about what it does.
It is therefore striking to me that an Old North street sign has a prominent place in that display. 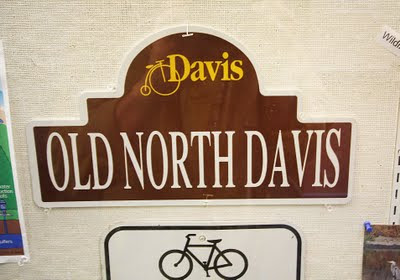 I asked this question because the ONDNA has custody of the replacement signs.
Specifically, ONDNA vice-president Dennis Dingemans has them. Then I recalled that when one went missing and another was attacked but survived this last Picnic day, Dennis took two replacements to Public Works. PW needed to replace only  one  sign and therefore now had a spare. So, there it is in City Hall.


Ah, the irony of it. The Old North is featured in that display as an artifact of Picnic Day vandalism and Dennis’ zeal in delivering replacement signs.  (I just hope he retrieves that spare. We do not have many of them and Picnic Day vandalism does not bode well for the future of the signs.)     JL
Posted by John Lofland at 5/17/2011 12:46:00 PM