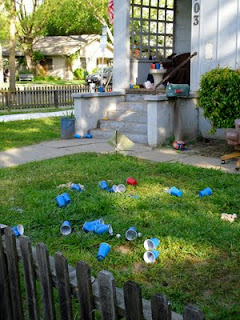 I didn’t have to go to Picnic Day this year; Picnic Day came to Old North Davis.  In fact it happened in my front yard and down the B-C alley.  Things started happening around 8:00 a.m. with the usual heavy parking and people going to Farmer’s Market.  But, by 11:00 a.m., the families had been replaced with drunken youth, fighting, and cars careening down the streets at speeds in excess of 40 mph.
I planned to stay around the house and do some gardening, but by 3:00 p.m. I had literally locked myself inside the house.  I witnessed groups of youths in my front yard fighting over who had to drive because nobody wanted the DUI.  One had wrestled the other to the ground and was beating his face to a pulp.   Behind that scene, their drunken dates were crying and pleading for the fighting to stop.  I thought about calling the Police, but the Police along with a paddy wagon had been cruising up and down 6th Street anyway so I just waited for them to make the rounds again.
The presence of the Police just scattered the group and no one was cited for public drunkenness or disturbing the peace, from what I could tell.  But, they were outside the “Safety Enhancement Zone”, so no need to spoil their fun.  I had never seen Police vehicles North of 5th Street on prior Picnic Days, not even during the notorious 2010 Picnic Day. 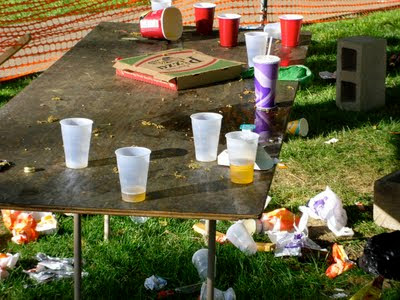 From what I could understand from their yelling, many of these youths had exited the freeway and parked at Borders and were just wandering around Old North scouting out beer pong parties.  The foot traffic on 6th, 7th, C Street and down the alley between B and C was comparable to the foot traffic on B Street during prior Picnic Days… in other words, it was unusually heavy.
I tried to go out and mow the lawn, but a group of really menacing-looking large men had just parked and gotten out so they could relieve themselves in my bushes.  They did so right in plain view with me standing there.
The sound of drunken threats, screaming, crying, and mostly aimless revelry continued until after dark.  The frequency of sirens was about one every 5 minutes down 5th Street. I was afraid to venture out in that direction.
Hey, if I were going to be fined double for public drunkenness or disorderly conduct I would get out of the so-called “Safety Enhancement Zone” too.  So, this year the logical and low-cost place to party was in the surrounding neighborhoods.
So, if your perception was that Picnic Day went relatively smoothly this year, a lot of it depended on where you were.  If UC Davis and the City of Davis really think that the “Safety Enhancement Zone” worked out great this year, I am writing to let you know that I was absolutely terrorized just by staying home this Picnic Day.
I hope that the families in my neighborhood also describe their experience for your benefit.  I spoke with one family who couldn’t let their children out of the house all day long.
Gosh, it’s great that UC Davis wishes to showcase itself in a “family-friendly event."  As it turns out, that event just isn’t Picnic Day.
Kathleen Groody
603 C Street
Davis, CA
Posted by John Lofland at 4/21/2011 05:21:00 PM