Amidst news of economic gloom, it is heartening to observe that there are at least three recent and sizable home upgrade projects in the Old North.  Construction dumpsters, porta-potties, and/or heavy construction equipment on B, D, and E streets have made the projects visible and even conspicuous. 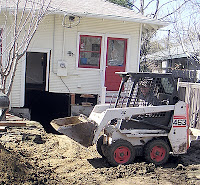 A now-completed project on B St. involved reconstruction of a portion of a wing of a home. The one on D is in the process of excavating for a large basement level.
The D St. project has featured a “tiny” Bobcat excavator that zips through a small opening under the rear of the house, scoops up dirt, and dashes back through the opening to dump its load in the back yard. The Bobcat driver kindly paused for the snapshot reproduced here. (The excavation hole is to the left in the snapshot.) 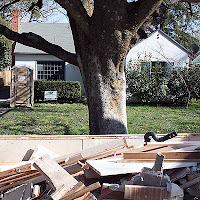 As ambitious as these two projects are, they pale when compared to the one on E St. There, the entire inside of the house--including the kitchen, bathroom and all the walls--has been gutted in preparation for an entirely new and redesigned interior. More, the garage at the rear of the lot has been removed to make way for a second unit.
The Old North continues its decades-long process of change in two directions simultaneously: significant and near-breath-taking upgrading accompanied by almost cascading blight. I guess, though, this is merely the story of human society itself.
Posted by John Lofland at 3/20/2011 08:51:00 AM