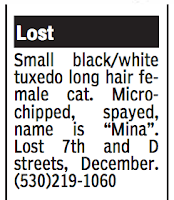 After posting early last Tuesday on the mystery of open cans of cat food found along 7th Street, later that day I happened onto the ad in the Davis Enterprise that is reproduced here. I called the number and the owner of  the cat “Mina” told me  that she and others had put out the food in a failed effort to lure the cat. So that cat puzzle was now solved.
But Mina was still lost & was thought to be among the cat intruders of 648 C. Alas, further investigation did not find Mina among those cats. So, she is still lost. If you know anything about a cat of Mina’s description, you can call the number at the bottom of the ad.
Posted by John Lofland at 3/11/2011 07:12:00 AM